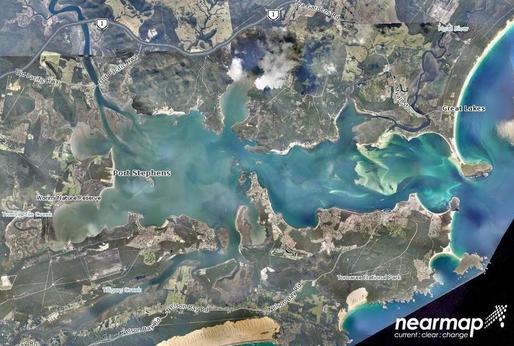 Visibility in Nelson Bay varies with the tides with clean water entering the bay with the incoming tide and dirty water exiting on the outgoing tide. This means that visibility is at its best at high tide and at its worst at low tide. The variation in visibility, in combination with strong tidal currents, means that divers typically only dive in the bay for a short period on either side of high tide.

Visibility in the bay at high tide averages around 7-8m, but it can at times be more than 15m at its best, and it might be less than 1m
at its worst. A number of factors influence how clean the water will be at high tide. These factors include rainfall, the size of the tides, the clarity of the water outside the bay, and the direction of winds in the bay.

To get the best chance of having good visibility in the  bay, dive on a large tide, at high tide, after a long period of low rainfall, while waters outside the bay are clear, and while winds in the bay are still or from the south.

Following periods of heavy rain visibility in the bay can  be appalling, as large volumes of dirty water are flushed down from the Karuah River and Tilligerry Creek further up the bay. The figure above (from www.nearmap.com) clearly shows the dirty water entering the western end of the bay in April 2011 while the water near the entrance of the bay is still  clear.